The story of Third Colony began in February of 2012. Founder, brewer, and disabled veteran Wade Ward, had been in the midst of preparing for a St. Patrick’s Day celebration with other members of the armed forces, when he got the call. His son, a proud US Army enlisted man, was in critical condition after being involved in a roadside IED incident. Without hesitation, Ward’s military brethren sent him to be by his son’s side to aid in his recovery. Before departing, as a token of appreciation for their support, he delivered a case of his home brewed Double IPA for enjoyment by all.

In the days following, he received numerous compliments regarding the quality of his libation, along with urgings from his compatriots to share his gift with the masses. For more than a year, he humbly accepted the acclaim of his peers as nothing more than kind words. However, as the overwhelming praise continued, he began to believe that he and his brew were destined for more.

In May of 2013, Ward and co-founder Mary Jackson, inspired by the support of friends and family, embarked on a journey to establish this N.H. based brewery as the first disabled veteran owned brewery of the modern era. Together the team of Ward and Jackson compiled the market analysis, built a sound business plan and set their sights on the perfect location.

Credit for the Third Colony name goes to Jackson. Ward challenged her to create a brand name that reflected a patriotic theme; paid homage to Ward’s disabled veteran status, and reflected the “Live Free or Die” attitude of the State of New Hampshire. Needless to say, she delivered. Jackson was also instrumental in the brewery’s logo conception, ensuring all the same target elements of the Third Colony brand name were incorporated into the logo to complete the brand package. Again, she was successful. The imagery selected resulted in a beautiful and well received logo, which underscores the values & principles of the Third Colony brand.

The first brew crafted by Third Colony for commercial consumption was the Double IPA, using the same ingredients as the home brew that started it all. Third Colony’s Double IPA, code named “Peer Pressure,” an ode to all of those who “influenced” Ward’s decision to bring his beer to the people, remains the brewery’s best seller to date.

The Third Colony brewery is housed in a 2000 square foot building. The location boasts easy highway access for distribution and customer tours. 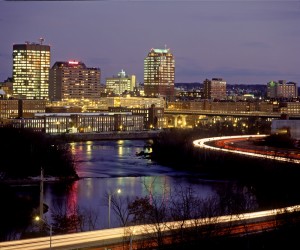